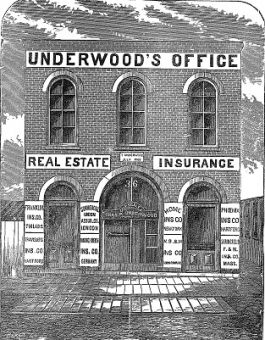 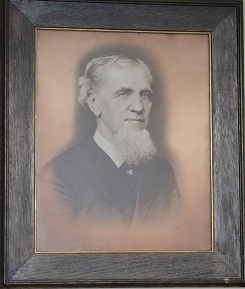 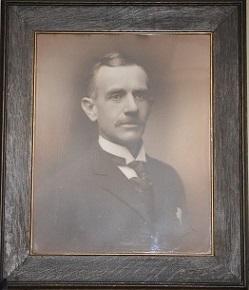 When Thomas Underwood founded his insurance agency in 1865, Lafayette was a city of about 9,000, steadily ex­panding in importance as an ag­ricultural and transportation center. That year the populace gathered on Main Street to cel­ebrate in gala fashion the close of the Civil War and what appeared to be an incoming era of increasing area domination by the city. Optimism ran so high, in fact, that one local historian was tempted to note that, due to an important new role as a rail­road depot and its location at the head of navigation on the Wa­bash River, Lafayette was soon to realize its manifest destiny as “The Star City of the entire west.”

Carried eagerly along by the spirit of expansion and high hopes, Underwood bought out the insurance firm of Peckam and Smith, where he had been employed before the civil strife. A native of Washington D. C., he settled in Lafayette in 1850, and was 44 that year when he initiated a business which was to be perpetuated to the present day by three generations of his offspring. Tom’s second son, Charles, soon to become an office partner, was already ten that founding year.

Thomas Underwood built his office in 1869. It was a two story, red brick building and later was painted on the outside with the names of the numerous insurance companies represented within: Home, New York; Phoenix, Hartford; North British and Mercantile; Spring­field Fire and Marine; Commer­cial Union; Franklin, Philadel­phia; Traveler’s Life and Acci­dent of Hartford. For several years the Underwoods also acted as real estate agents – with an early office advertisement, “If we can’t suit you, it is useless to go elsewhere.”

Charles Underwood joined his father’s agency in the mid 1870’s. In 1877 Charles’ son Richard was born, and for a few years the agency advertised as T. Under­wood, Son & Grandson. This arrangement was soon dissolved, however, when Thomas and his wife moved to Chicago in 1883, leaving Charles to run the busi­ness alone.

Until the turn of the century, Charles was sole owner of the Underwood Agency. Many times he would leave town on business trips and spend the night in the

home of a client in some rural area. During these absences the agency would be left without management. Thus the arrival of Richard C. Underwood at the office was extremely welcome.

Richard represented the third generation of the family to be employed in the business on Ferry Street. He arrived at the agency around the beginning of the Twentieth Century. At age twenty-five he was an office partner with his father; and unlike Tom and Charles, he would never have to run the business alone for a long period of time. In 1913, Charles Underwood passed away and Walter Graham (the husband of Charles’ daughter, Helen Wilson Underwood) would come to help Richard, who, in the short time since his father’s death, had been struggling with the business alone.

Charles Underwood’s passing mark­ed the end of a lifelong career devoted to concerned insurance service. It also symbolized the end of the first half century of agency history and ushered into prominence the third generation of Underwood Agency under­writers.

The birth of Richard’s son (named Richard after his fa­ther) in 1903, assured a family successor to the agency. The Underwood name would continue to distinguish the business. In 1915, however, tragedy took the life of young Dickie, just reaching age twelve. His father had no other children, and was thus the last of the Underwoods to inhabit the red brick building that still bears their name.

The two brothers-in-law re­mained alone in the office for 15 years until the arrival of Charles Nitcher from Chicago. Nitcher had traveled to Lafayette in 1928, and was soon a third partner in the Underwood Agency business. The fourth generation wouldn’t join the agency until 1946 – when Walter and Helen Graham’s son, John, joined his father and Charles Nitcher at The Un­derwood Agency. He was the first member of the fourth gen­eration of men to be employed at 310 Ferry Street.

Lafayette in 1946, like cities all over the nation, was beginning to relax after the strain of the war. Citizens threw away their ration stamps and flocked to the stores to buy all the wartime scarci­ties. Gold stars marked the win­dows of

residential side streets, indicating that the new mate­rial wealth and abundance could not soon smother the tragic mem­ory of a cruel war. But the abun­dance, nevertheless, did exist. Factories that had competed for “E” awards during the fighting, kept up the high production. A wealth of housing materials crea­ted the growth of the suburbs. The minerals that had gone into tanks and guns, were now poured into automobile molds and the two-car families began cropping up. Even babies were in abun­dance as the post-war boom crea­ted the crowded classrooms in existence today. All these things typical of the nation, as a whole, were becoming apparent in La­fayette when John Graham re­turned to the city to become an insurance agent.

Richard Underwood, absent dur­ing John’s arrival, returned to the office occasionally afterwards, but was soon fully retired. He died in Lafayette in 1961 at the age of 84; and with his death the Underwood family was lost to the business forever.

In 1953 the agency suffered a great loss at the death of Charles Nitcher. For twenty-five years he had been a valuable office partner and insurance under­writer. He left a vacancy which would not be easy to fill, and yet a replacement was badly needed. Walter Graham was quickly reaching retirement age, and af­ter that his son would be alone.

The young man who was found to replace Nitcher was Laverne A. Kast. Kast was a native of the state of New York, where he grew up on a farm. By 1955 Laverne Kast had become a partner in the business with Walter and John Graham. Walter Graham retired from the firm in 1956 and the third gen­eration of agents was vanished from the building. Mr. Graham now resides alone just outside of Lafayette. Since his retirement, he has sold out his share of the business to his son and Mr. Kast. Having existed through the years as either an individual pro­prietorship or a partnership, the agency continues today as a partnership owned by Graham and Kast doing business as The Underwood Agency. Through one hundred and fifty years, up to the present day, the firm has had on­ly seven owners.

The business of insurance is one of constant change. Insur­ance contracts of the present day would probably seem most strange and complex to the early members of the firm, were they able to return and view the cur­rent office operation. The origi­nal agency was one devoted al­most entirely to the writing of contracts of fire insurance. The agency today, changing and add­ing to its line of coverage over the years, writes many forms of personal and business insurance and employee benefits products.

Looking to the future with a be­lief in the continuation and growth of the agency, Graham and Kast, in the spring of 1964, added Kenneth D. Witham to the agency staff. Witham is a native of South Bend and a for­mer student at Notre Dame Uni­versity, who came to Lafayette in 1961 as a casualty insurance adjuster with the General Ad­justment Bureau.

Today business patrons can view on the agency walls a series of individual picture portraits of all the office owners hung in or­der of their arrivals at the building. Starting at the front of the east wall with Tom Underwood, the series moves left past Charles and Richard Underwood, around the corner and left along the north wall past Walter Graham and Charles Nitcher, and into the second room where the desks of John Graham and Laverne Kast are now located. Seven businessmen, partners in perpe­tuation. Four generations of un­derwriters. One hundred and fifty years of concerned service.

5 Things to Look for in a Neighborhood

How Long Can Your Car Sit Without Driving It?

How Does Automatic Emergency Braking Work?

The Impact of COVID on Our Lives Two Years Later

How Many Miles Can a Car Last?

Fast Fix: How to Defog Your Windshield

A Parent's Guide to Car Seats

How to Create Your Employee Handbook

Insurance Careers: What is an Underwriter?

Reviews from Our Customers
“Absolutely phenomenal service! My original provider had quoted me “state minimum coverage” on my Auto Insurance, and I was getting charged $170/month! Chuck Clark’s team had TRIPLED my protection on my car and motorcycle, ADDED Renter’s Insurance, and LOWERED my total annual premium substantially! The service was quick, and the insurance producer was extremely knowledgeable! Highly recommend ANYONE to give them a call! Look what it did for me! Extremely satisfied customer!”
- Mike M., Indiana
“I am writing this to inform you of the outstanding service we have received from our agent. He is always extremely prompt to address our questions and needs as they arise. He always goes above and beyond what we could ever ask for in an agent. We have never received such efficient service and knowledge from any past agents we have worked with. We have been with Chuck for over 5 years now and couldn’t be happier with all he does to ensure we are properly insured.”
- Missy, Fowler, IN
“By switching to Preferred Insurance, my husband and I have been able to increase our liability coverage – with a reduction in premium. I feel that we have a more complete and comprehensive insurance package versus our previous insurance company. Our agent is very knowledgeable about farm and property insurance market. We have had a couple of claims and they were handled fairly and efficiently. I recommend our agent to others because it is a good company with reasonable premiums.”
- Linda, Rensselaer, IN
“It is nice to work with people that are true professionals, who respond quickly to our needs and actually pay attention to the safety programs we put in place. Preferred Insurance and our agent are wonderful.”
- Terry, Blue Island, IL
“You don’t know how nice it was to have the last couple of years come and go without letters that we were being dropped. Thank-you for all your help and in finding a good company for us. At least I can breathe for another year!!”
- Amy, Gary, IN
“I am very happy with the service ERIE insurance gave us for the accident of our vehicle. It was nice to have people that were so nice. If you could please let them know that I would definitely recommend them for as quick as they took care of the claim. Thanks for every thing.”
- Becky, North Judson, IN
Five Stars!
- Erica N., Remington, IN
Five Stars!
- Connie D., Remington, IN
“
”
Ready to Request a Free Quote? GET STARTED TODAY